I heard about Frederick Taylor name  first time when I was a second year undergraduate student at Middle East Technical University. I was taking a course from Industrial Engineering Department and the first assignment in the course was a short essay about Frederick Taylor. Through this assignment, I had learnt that he was considered as  the father of scientific management. He was a productivity guru of the time.

After I graduated from Middle East Technical University, I started a Master degree at Sabanci University. My thesis supervisor was Prof. Erhan Budak who was awarded with Taylor medal by the International Academy for Production Engineering (CIRP). He had developed a method for design of variable pitch milling tools to  increase  material removal rate  by optimising stability of the process. As this had considerable productivity increase in machining of high value components such as blisks, CIRP community must have thought that this work was worthy of a Taylor Medal.

In my first year at the Master Degree, I got the graduate course “Metal Cutting Mechanics and Dynamics” from Prof. Budak. I was faced with  Taylor name again when I learned about the famous Taylor’s tool life equation. Taylor had identified the relation between the cutting speed and  tool life. This was an empirical equation which was invaluable for machining process planners. It helped them to understand how much tool life would decrease if they increased the cutting speed. Then, there was also a modified Taylor’s tool life equation which can also include the effect of feed rate and depth of cut. This was even more useful although it required a considerable experimental work to test the effect of the additional parameters.

I started my PhD on stability of 5-axis ball-end milling processes. I was aiming to develop a predictive model to help process planners select process parameters such that chatter vibrations are avoided. Several researchers had developed stability models for 3-axis flat-end milling and ball-end milling. However, there was no available model for 5-axis ball-end milling. Hence, process planners  were using either trial and error process which was quite costly or using 3-axis models that were not valid for 5-axis milling which resulted in errors in predictions. The reason 5-axis stability models were not available was related to complexity of  5-axis milling process geometry. There are two additional parameters in 5-axis milling called lead and tilt angles. Fortunately, I had a good understanding of the geometry of 5-axis milling processes due to my master thesis work. I had simulated the effect of these angles on cutting forces and form errors earlier. Hence, I was ready for the challenges about the geometric complexities of the process. I just needed to improve my understanding about the dynamics of the processes.

In the early phases of my PhD, I came across with Frederick Taylor once more. Apparently he had  made the following statement around 1o0 years ago.

“Chatter is the most obscure and delicate of all problems facing the machinist –probably no rules or formulae can be  devised which will accurately guide the machinist in taking maximum cuts and speeds possible without producing chatter”(Taylor, 1907)

Finally, I have had access to the source of this quote ,”On the Art of Cutting Metals” book. I have borrowed it from the University of Sheffield Library. It was a very interesting feeling to have and read it which was written more than 100 years ago. In fact, this experience has inspired me to write this post. I am sharing the photo of cover and original related text below for your attention.

He was absolutely right, there was no formulae available to predict chatter vibrations until 1954. Fortunately, researchers were working on this important problem. Finally, Tlusty was able to formulate the  absolute stability limit for chip width for turning operations. That meant if the process planner selected a chip width smaller than this limit, the process would be stable and there would not be chatter vibrations irrespective of the spindle speed used.

This important work of Tlusty was further improved by  Tobias in 1960. Tobias demonstrated effect of spindle speed on stability limit. Hence stability lobe diagram emerged.  Stability lobe diagram is a plot of cutting depth/chip width with respect to spindle speed. It gives us  boundary between stability and instability. The area below it is stable whereas the area above is unstable.  As you can see from the below figure, red point is in the unstable area and if the spindle speed and cutting depth corresponding to this point is used in the process, resulting surface will have the chatter marks which deteriorate the surface quality. On the other hand, if the process planner selects the cutting depth and spindle speed corresponding to the green point,  chatter vibrations can be avoided and a good surface finish can be obtained.

Stability lobe diagram was an important breakthrough because it was changing the perception of the machining community. Even today, higher speed is generally associated with higher vibrations. However, in case of chatter vibrations, this is not correct. As shown in the stability lobe diagram below, there are specific spindle speeds which result in higher stability and hence higher cutting depths are possible at those speeds. As a result, rather than decreasing the depth of cut and spindle speed in case of chatter, increasing the spindle speed and depth of cut may as well help solution of the chatter. Both chatter vibrations are avoided and productivity is increased this way. 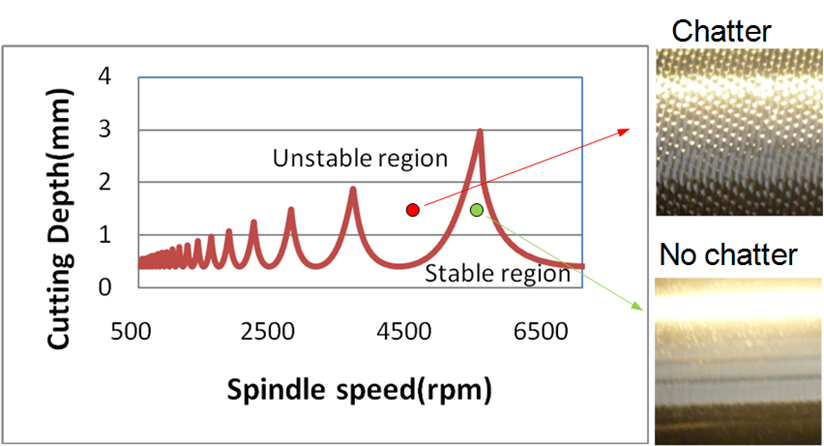 Chatter vibrations is continuing to be an active research field since then.There have been many different methods developed to generate stability lobe diagrams including my own works. I don’t intend to go into the details of them here. However, I would like to emphasise that the fight against chatter is continuing. Drivers for this effort are  development of new processes, tools and materials for manufacturing of high value components. Application teams are generally the first people to face with problems in this fight as they test new developments they come up with to answer manufacturing needs.Sometimes the problem they face  may exceed the capability of the existing predictive models. But, as researchers, we are working hard  on improving predictive models to catch up with the developments to serve to the needs of the industry.